The water temperatures are finally starting to cool off, and the air temperatures are ranging between 75 and 85 degrees. It’s fall time and as I mentioned in my previous reports the big bonefish have come out to play.

The past few weeks I’ve been hopping backing and forth from Biscayne Bay to Islamorada and the fishing has been good in both locations, but has been best in Biscayne Bay. I’ve been finding better concentrations of fish in Biscayne Bay along with better permit fishing as well.

The highlight from the past few weeks was 14 year old Christian Nayler from South Carolina. His Dad Peter Nayler booked me for four day of fishing for Christians Birthday. Christian has been fly fishing since around the age of ten and has been bone fishing in Mexico several times, but his goal for this trip was to catch a big bonefish.

The weather on the first day of fishing was not in our favor. We had a small cold front move through the night before and we had overcast skies and breezy conditions. It was tough fishing and the bonefish moved off the flats with the change in pressure. Second day we headed over to Flamingo to mix it up a bit with some redfish, trout and played around with some lemon sharks as well.

On the third day it was back to bone fishing. The morning started off slow, but as soon as the tide stated to change the bonefish came out to play. I spotted a school of fish and pointed it out to Christian and he maid a great cast and Fish ON! Christian just hooked up to a double digit Islamorada bonefish on fly. After several good runs I landed the fish for Christian and it was a fat 11.5 lbs bonefish. Christian had a smile from ear to ear and was so excited that he was almost speechless. This is a great accomplishment for any angler especially for a 14 year old kid. 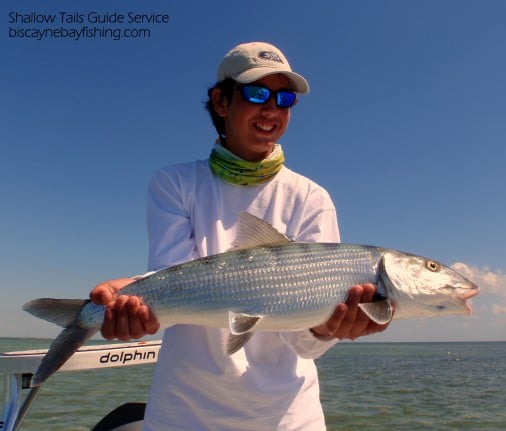 On the fourth day we had some overcast skies in the morning, but I new it was not going to last long. We went to the backcountry to play around with some trout to kill some time and while doing so, Christian caught his first trout on fly. It wasn’t a big trout, but another species to check of the list. I noticed the clouds were clearing up so we headed back to down town Islamorada to get Christian on another bonefish. Well what do you know an exact repeat from the day before. A school of fish came in at our 12oClock and Christian made a money cast and hooked up again. Once the fish got closer to the boat I told him it was another big one. I landed the fish and it was another fatty. This fish went 10 lbs and change.

I want to thank Christian and his dad Peter for fishing with me four days in Beautiful Islamorada, and I have to give my hats off to Christian for catching two trophy bonefish on fly over ten lbs. He accomplished something that takes most people years to do in only four days.

I believe one of the reasons why it was his time was the fact that he was patient and he was always focused and ready to take the shot. There are times when the bonefishing can be tough and there not where they normally are. Conditions change day to day and the fish move, and a lot of people get frustrated and inpatient. Not Christian, he is a complete angler and he knows it’s not about the quantity and if your patient good thing will happen.

Happy Birthday Christian, good job and it would be my pleasure to have you on the bow of my boat again. Now you need a big tarpon to scratch off your list.